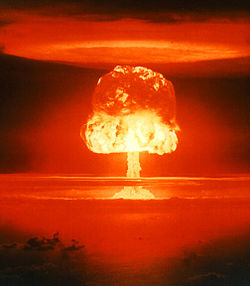 Eliot Cohen, the director of strategic studies at the Paul H. Nitze School of Advanced International Studies at Johns Hopkins University, declared in the Wall Street Journal little more than a month after the attacks on the twin towers and the Pentagon, that the struggle against terrorism was more than a law-enforcement operation, and would require military conflict beyond the invasion of Afghanistan. Cohen, like Marenches, considered World War III to be history. "A less palatable but more accurate name is World War IV," he wrote. "The Cold War was World War III, which reminds us that not all global conflicts entail the movement of multi-million-man armies, or conventional front lines on a map." In a 2006 interview, U.S. President Bush labeled the ongoing War on Terror as "World War III"


I have a good friend who represents the Nibiruan Council and we stay in contact via email and this blog is about the current news in the Middle East. I have the email transcribed for you to read and watch the videos regarding the acceleration of a time line to avoid a possible WWIII scenario. I do not always like to be the harbinger of bad information, but Jelalia Starr (previously introduced in a blog) represents the Galactic Federation and our overt behavior dictates an invention if another war were to commence. So you be the judge based on this transcription. I look forward to comments and how we as humans can start loving one another. In her exact words Jelalia indicated the following:

Video Link: http://youtu.be/XDH4QYPwqs0
"Hey Raymond,
Been following the news and watching how the US is spoiling for a fight with Iran.  I know, it's become so commonplace, the US trumping up changes against Middle Easter countries and then invading that we here in the US have become desensitized to it.  Yet the latest target, Iran warrants our attention.  If the US succceeds in their plans we will find ourselves in World War III and I'm not overexaggerating.  So if you find yourself yawning as you read these words, ready to hit the delete button just imagine me poppin' out of your screen and slapping ya up side the head.  *smile*
You may be chuckling right now at the thought of that (and I am, too), but really serious.  I'm going to give you a few research links that I want you to look at. One is to a video by Foster Gamble that I shared a few weeks ago.  He is explaining why the US is trying to invade Iran...and Syria and it as nothing whatsoever to do with terrorism or nuclear weapons.  The other links are to radio shows between Andrew Webre and Drake and the other between Webre and Andrew Basiago.
Drake discusses altering timelines and Basiago, involved in Project Pegasus as a child where the US Military sent him into both the future and the past, discusses time travel, as well as altering timelines. I want you pay special attention to what he says about how we humans have a unique capabliity to alter time.  Lastly, all three explain what you and I need to know about what is really going on so that we know what we need to alter.
Foster Gamble video:
http://youtu.be/O36Zof9U9UY
Weber/Drake call:
Webre_Drake call
Webre_Basiago call
Webre_Basiago call
Okay so why am I so passionate about this when I usually take a neutral stance?  And why after I said I was going to phase out of thsi work, am I still writing?!?!  After the understanding I arrived at last week (explained in last week's message), I realize that I need to keep going.  As one who was trained for this time, I feel it is my divine duty to help guide you through the next 6 months.  That means pointing out what you need to be aware of, and doing what I can to ensure you are informed and prepared to act when necessary.  By the way, this is one of those times you need to act!
So what is it you and I need to do right now?
Once you understand how we can alter the timeline (isn't it funny how science is now catching up with what the Nibiruans explained over a decade ago?) then you also understand that the more we work as a group and combine focused energy, the more of an impact we will make.  To that end I am considering doing a conference call.  I will explain the bigger picture of what is going on along with the galactic perspective.  Once everyone is briefed we will do a group focus, envisioning a more positive outcome.  To make this really, really work, we must release those that we feel are to blame from their role and for that we will use the Formula of Compassion.  If you do not know it, you can access it on my webisite.
Formula of Compassion:
http://www.nibiruancouncil.com/html/formula_of_compassion.html
I'm proposing that we do this call on Friday evening August 31st.  I'll set it up if enough people respond and say they want it, so if you feel you want to be part of the solution, then respond to this email and let me know by Wednesday at 5pm Central time.  I'll set it up for around 8pm Central time...and it will be free.
World War III
Should we not alter the timelme the result will be World War III.  If you've done any reading on this then you know it will be far worse than any war before.  The reason is that it won't be fought on the ground as in past wars, but from control rooms around the world.  Millions of people will be killed by scalar weapons and those who survive will wish they hadn't.  I'm not trying to frighten but I am trying to make you painfully aware of the consequences of not acting.
Now, Iran is trying to prevent a war by inviting the world leaders to put an end to using scalar technology and its associated weapons against each other .  He has released the technology to scientists around the world with the intention of preventing any one nation from grabbing it and using it against others.  Mr. Keshe has also made it known that Iran will use this technollogy to defend her borders against any and all aggression."
Keshe/Iran link:
http://preview.tinyurl.com/btpz83j