Truth or Lie? The Location of the Second Coming 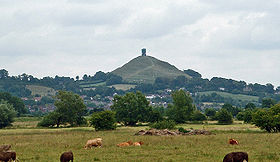 In 1988 I traveled to the United Kingdom to attend a health conference at Oxford Hospital, Oxford regarding radionics, as someone interested in crop formations  and the pre-history of England I of course researched Glastonbury Tor which has traditionally been identified as the place of the second coming, and is also one of the great power centers of the ancient pagan religion. Further, I visited Stone Henge. On Whitley Strieber's web site is this account for revelations...before you undertake this  journey I have brief information on Glastonbury Tor.

Glastonbury Tor is a hill at Glastonbury, Somerset, England which features the roofless St. Michael's Tower.  The spot seems to have been called Ynys yr Afalon (meaning "The Isle of Avalon") by the Briton and it is believed by some to be the  Avalon of Arthurian legend.


The Celtic name of the Tor was "Ynys Wydryn", or sometimes "Ynys Gutrin", meaning "Isle of Glass". At this time the plain was flooded, the isle becoming a peninsula at low tide.

Read the original source: http://www.unknowncountry.com/revelations/latest#ixzz21523gAia
Posted by Unknown at 8:01 AM