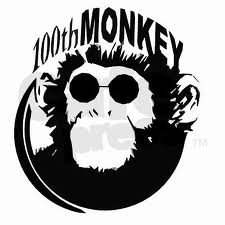 What can be said about the law of attraction is simply this that if enough individuals who support a belief in some thing would be a situation that is accelerated as a product momentum and is now  likely to occur. This is often the case based on the phenomenon called the 100th monkey. This is an event where learned behavior spreads "instantaneously" from one group of monkeys to all related monkeys once a critical number is reached.

Generally, this means the instantaneous spreading of an idea or ability as the remainder of a population once a certain portion of that population has heard of the new idea or learned the new ability by some unknown process currently beyond the scope of science. This is indeed the law of attraction accelerated.

Accordingly, the hundredth monkey effect was published in Lyall Watson's foreword to Lawrence Blair's Rhythms of Vision in 1975, and spread with the appearance of Watson's 1979 book Lifetide. However, a study of macaque monkeys on the Japanese island of Koshima in 1952 was the event where Japanese scientists observed some of these monkeys had learned to wash sweet potatoes watching humans (monkey see monkey do), and gradually this new behavior spread through the younger generation of monkeys—in the usual fashion, through observation and repetition.

Interestingly, once a critical number of monkeys were reached—the so-called hundredth monkey—this previously learned behavior "instantly" spread across the water to monkeys on nearby islands. One could call this effect the law of synchronicity.

As Ken Keyes, Jr. indicated in his book The Hundredth Monkey, Keyes' book identified the devastating effects of nuclear war on planet Earth. Keyes presented the hundredth monkey effect story as an inspirational parable, applying it to human society to effect positive change. Since then, the story has become accepted as fact among New Age authors and personal growth gurus. It has become an urban legend and part of New Age mythology. However, Rupert Sheldrake has cited that a phenomenon like the hundredth monkey effect would be an evidence of Morphic fields. I was particularly interested in this as insight because he proposed a non-genetic account of morphogenesis and for his research into parapsychology. His books and papers stem from his theory of morphic resonance, and cover topics such as animal and plant development and behaviour, memory, telepathy, perception and cognition in general."Morphic field" is a term introduced by Sheldrake. He proposes that there is a field within and around a "morphic unit" which organizes its characteristic structure and pattern of activity.

According to Sheldrake, the "morphic field" underlies the formation and behavior of "holons" and "morphic units", and can be set up by the repetition of similar acts or thoughts. The hypothesis is that a particular form belonging to a certain group, which has already established its (collective) "morphic field", will tune into that "morphic field" whih is synonymous with "like attracts like" as the law of attraction.

The particular form (thought-form?) will read the collective information through the process of "morphic resonance", using it to guide its own development. This development of the particular form will then provide, again through "morphic resonance", a feedback to the "morphic field" (aether field, universe/cosmos?) of that group, thus strengthening it with its own experience, resulting in new information being added (i.e. stored in the database). Sheldrake regards the "morphic fields" as a universal database for both organic (living) and abstract (mental) forms.

Perhaps synchronicity is the experience of two or more events that are apparently causally unrelated or unlikely to occur together by chance, yet are experienced as occurring together in a meaningful manner? The concept of synchronicity was first described by Carl Gustav Jung, a Swiss psychologist, in the 1920s. Nevertheless, the concept does not question, or compete with, the notion of causality. Instead it maintains that, just as events may be grouped by cause, they may also be grouped by meaning. A grouping of events by meaning need not have an explanation in terms of cause and effect. Perhaps correlation is a more appropriate expression.